Manhattan’s Third Avenue corridor, running from 42nd Street to 59th Street along the eastside of Midtown, has faced rising availability, declining face rents and departing tenants before the pandemic began.

Characterized by buildings largely built in the 1960’s-1980’s and a lack of new construction, this corridor faces increasing challenges in a post-pandemic environment. Its recent presence in the news can be attributed to high-profile tenant relocations away from the corridor toward newer developments. The result is a 29% vacancy rate, as reported in The Real Deal using data from Savills. Compared to other parts of Midtown, negative sentiment on Third Avenue’s future also focuses on its distance from the subway and that its large office footprints are difficult to convert into other types of space.

Can Third Avenue adapt to a post-pandemic environment characterized by remote work and flight-to-quality or is it at risk of obsolescence? Using CompStak’s office transaction data, we evaluated its leasing performance since 2017. 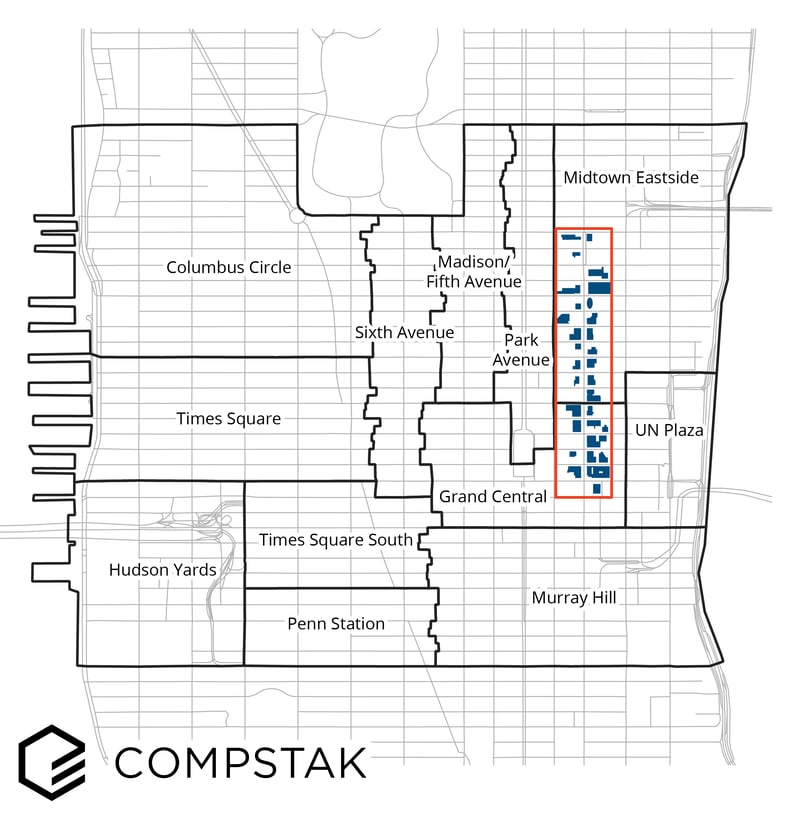 An upcoming wave of expirations is expected to hit Third Avenue, and with the risk that many of those tenants may choose to relocate rather than renew or simply forgo future office space altogether, vacancy rates could further climb.

But, emblematic of the aging corridor’s challenged future - Despite representing 6% of the Midtown office market, Third Avenue will represent 14.6% of its expiring space in 2026.

While average starting rent in Midtown has shown an upswing from pandemic lows due to increasing activity in new construction at triple digit starting positions, Third Avenue rents are still recovering from their 2021 low. But the difference is apparent: Third Avenue has consistently commanded rents much lower than the rest of Midtown.

That gap has widened following the onset of the pandemic. From 2017 to the 2019, space along Third Avenue traded at a 25% discount relative to the rest of midtown. Since 2020, that discount has expanded to 30%.

When factoring free rent and concessions for both Third Avenue and Midtown, the spread in Effective Rent remains the same - Third Avenue space traded 26% below Midtown from 2017 to 2019, expanding to  30% below from 2020 to now.

Since Third Avenue space has historically traded at a discount relative to the rest of Midtown, work values have trended similarly, trailing averages for Midtown overall since at least 2017.

However, work values in the corridor are still on the rise, as they are across New York City. Average work values in New York City direct office transactions are up by 38.0% from the end of 2019, according to CompStak’s data. A variety of factors influenced their rise including a preference for higher quality buildouts to attract employees back to the office and a substantial increase in construction and materials costs as a result of inflation and supply chain pressures.

CompStak tracked office tenant relocations between Third Avenue and other parts of Manhattan from the first quarter of 2017 to present.

Throughout that period, CompStak’s data showed that more than 68% of tenants with offices on Third Ave who moved buildings relocated to a new submarket. Of those, a plurality of tenants (39.3%) moved to the nearby Grand Central submarket. However, the Sixth Avenue corridor, running from 41st to 59th Street, accounted for the greater share of relocations by square footage from Third Avenue.

Not surprisingly, tenants leaving Third Avenue moved to newer buildings—more than 61% moved to properties built more recently than their previous location. And accounting for major renovations as well— this figure is even higher—about 70% opted for buildings that were either built or received a major renovation more recently than their previous locations.

Glimmers of hope do, however, exist for Third Avenue. As proof of the move away from traditional office tenants, Memorial Sloan Kettering Cancer Center purchased a portion of 885 Third Avenue, the “Lipstick Building”, with plans to fill much of its more than 400,000 square feet future footprint with research facilities. On the flip side Durst recently poured $150 Million into a retrofit of 825 Third Avenue to draw tenants back to Eastern Midtown, upgrading spaces and putting in an outdoor terrace. In the meantime, the future of Third Avenue’s office market remains in flux, wrapped in a larger question of future office demand in an era of hybrid work and whether it can compete with its newer and shinier neighbors to the West.

Want to get more CRE insights of your own? Request a demo with our team here!